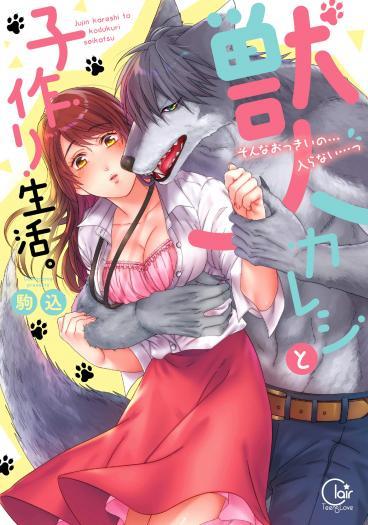 [Major Tags/Notes] Furry(anthropomorphic) Characters, Frequent H-scenes (censored) between a Furry ML x Human FL, Boss-Subordinate relationship, Attempted Non-Consensual Molestation (by side character), Exhibitionism/Vouyerism, Mutual Romance A lewd yet sweet manga depicting a rare but increasingly popular pairing in manga: an anthropomorphic wolf male lead paired with a human female lead character. Society is divided between humans and therianthropes - beastial humanoids. They are honest, instinctually driven, glamorous, superhumanly powerful and intelligent; they're frequently idolized in the upper echelons of society and are found as high ranking members of companies. Interracial couples between humans and therianthropes are somewhat frowned upon, with the social differences between them. However, therianthropes seem to be of the habit to make 'playmates' of humans. Haruka Aihara is a 24 year old office worker who is just doing her best to steer clear of the scarily intimidating therianthropes in her company. All she wants is to enjoy her year-long relationship with her human(?) boyfriend Mitsuru. Despite being together for so long, he hasn't even kissed her, and tensions are coming to a head. Her life takes a turn when she tries to force the issue and discovers his secret: he's a beast himself! Chapter List Start reading